Emmett H. Tidd grew up in East Texas and finished Middle School in Tyler, Texas. He graduated from Central High School in Oklahoma City, OK. In December 1942 he enlisted in the U. S. Naval Reserve as an Apprentice Seaman. While at the University of Oklahoma he was a member of the Naval Reserve Officer Training Corps Unit. All members of the Unit were placed on active duty 01 July 1943 as Midshipmen, USNR, to continue studies on an accelerated wartime curriculum, without breaks between semesters. As a senior he served as Unit Battalion Commander and was commission a semester early as Ensign USNR on February 24, 1945.

With orders in hand to his first choice of sea duty, (a destroyer !), he went to Norfolk, Virginia, but first, via Tyler, TX . There, the day after his commissioning, he and his sweetheart of their pre-teen years, were married in a long planned church ceremony, well attended by parents, friends and many classmates present. 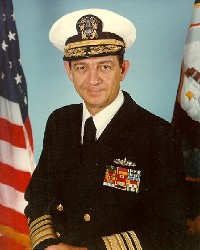 In Norfolk, Philadelphia and Bayonne, NJ, he had instruction in, and helped train, the pre-commissioning crew of the newly launched destroyer, USS GYATT (DD-712). VE-Day, “Victory in Europe,“ occurred during this period. But GYATT was on an urgent fast track for duty in the Western Pacific. Upon commissioning of GYATT, 2 July 1945, Ensign Tidd was her Assistant First Lieutenant and Damage Control Officer.

After a rushed shakedown training in the Caribbean they continued direct toward the Pacific. But, the war with Japan ended and GYATT was returned to Bayonne, NJ for her Post-Shakedown yard period. Pensacola, FL became their Homeport, from which they had a variety of sea duties, as demobilization commenced. Local operations included escorting aircraft carriers in the Atlantic, Gulf of Mexico and the Caribbean.

When eligible for release, Ensign Tidd requested inactive duty status so he could return to the University of Oklahoma to complete final work on his Bachelor of Science degree, which he had not received, by virtue of his early commissioning.

His request for inactive duty was granted and he was detached from GYATT in March 1946. He completed all requirements at OU and in February 1948 was awarded the BS Degree in Industrial Management. While on inactive duty, with their own business in Tyler, TX, he was active in the Naval Reserve Training Program, for care and reactivation of ships in the “Moth Balled Fleet” at Orange, TX.

On 24 June 1950, South Korea was attacked by the North. Navy sent out urgent requests for Navy Reservists to return to active duty. Volunteering, Ensign Tidd, USNR, was placed on active duty with orders to San Diego for reactivating a destroyer. He was reported to be the first Naval Reserve officer recalled to active duty in East Texas, for the Korean hostilities.

Newly promoted to Lieutenant Junior Grade, he reported 15 August 1950 for duty in connection with the reactivation of USS FRANK E. EVANS (DD-754) in San Diego, CA. That destroyer was re-commissioned on 15 September 1950. Naval Reservists manned over half the the billets in that first Division of four reactivated destroyers, all from the Moth Balled Fleet. They arrived off Korea, in early January 1951.

USS FRANK E. EVANS (DD-754 was heavily involved in the “Siege of Wonsan,” being fired on frequently by enemy batteries in the many caves around that heavily mined harbor. Hit only once, but four topside personnel received Purple Hearts. LTJG Tidd was awarded the Navy Commendation Medal with Combat "V". "For meritorious achievement ... while serving as Bombardment Intelligence Officer on the Staff of Commander Wonsan Bombardment and Patrol Element, during the periods from June 11, 1951 to June 19, 1951 and June 28, 1951 to July 13, 1951.

Enroute back to San Diego, the ship was advised of his promotion to Lieutenant, USNR. While taking over as Operations Officer, he received orders for detachment, and to report to the Washington DC area for duty in the Bureau of Naval Personnel.

From March 1952 to April 1954, he was in the Officer Procurement Office in the Bureau of Naval Personnel, Navy Department, Washington, D. C. While serving there in the rank of Lieutenant, he was selected as one of 15 in a highly competitive program for transfer to USN status.

After BuPers duty, in April 1954 he was ordered to Pearl Harbor, Hawaii, and served as Operations Officer in the destroyer USS RADFORD (DDE-446). While on board that antisubmarine destroyer, they took part in the evacuation of Tachen Islands, located just off the Chinese Coast. During the tour in RADFORD, the Tidds had the long awaited birth of their first child.

At the request of their Squadron Commander, LT. Tidd was transferred from RADFORD in April 1955 for duty as Operations Officer, Antisubmarine Warfare Officer and Gunnery Officer on the Staff of Commander Escort Destroyer Squadron ONE (subsequently re-designated Commander Destroyer Squadron TWENTYFIVE) a squadron with 12 destroyers (3 divisions). They were engaged in advanced hunter/killer experimental tactics in the Hawaiian and far Western Pacific areas. Later in this period, he and “Muggs,” (Margaret Tidd), were again blessed with the birth of a much wanted second son.

In November 1956 LT. Tidd became the 2nd Commanding Officer of the USS FORCE (MSO-455), a new class of non-magnetic, Ocean Class, Minesweeper. Homeport was Long Beach, CA, but deployment this cycle had them engaged in special operations in seaward approaches to each end of the Panama Canal. They operated on both the Pacific and Atlantic sides of Panama, with frequent transits through the canal. During this sea command period Lieutenant Tidd was promoted to Lieutenant Commander, USN.

From August 1958 to June 1959 he attended the Command and Staff Course at the Naval War College, Newport, Rhode Island. On graduation he had orders to Washington. From July 1959 to April 1961 he served in the Strategic Plans Division, Special Weapons, Office of the Chief of Naval Operations, Navy Department.

On May 3, 1961 he was promoted to Commander, USN upon assuming command of USS RICHARD B. ANDERSON (DD-786), a newly modernized (“FRAM-1”) destroyer in the Pacific Fleet. . During command of ANDERSON, the ship participated in "Operation Swordfish" and was the standby firing ship, and platform for the surface scientific camera party nearest ground zero, for the first operational firing and detonation of the live nuclear warhead on an ASROC (Anti Submarine Rocket). This sea command period also included operational deployments in the Eastern Pacific with the Third Fleet during the Cuban Missile Crisis. Later, came deployment with the Seventh Fleet Fast Carrier Striking Force in the Western Pacific.

In April 1963 he became the third commanding officer of the Guided Missile Destroyer USS Charles F. ADAMS (DDG-2), Atlantic Fleet, home ported in Charleston, SC. It was that class leader’s first yard overhaul and upgrading of the missile guidance electronics. Operations included refresher training and missile qualifications with testing of all guidance and firing situations. Also, there was duty with Second Fleet Ops in the Atlantic and Gulf of Mexico.

In July 1964 CDR. Tidd was detached to return to the Office of the Chief of Naval Operations for duty again in the Strategic Plans Division, this tour as Objective Force Levels Officer. During this period he was promoted to Captain, USN. His end of tour award, stated, "For meritorious service from July 1964 to July 6, 1967..." he was awarded a Gold Star in lieu of the Second Navy Commendation Medal.

In June 1968 Captain Tidd assumed command of the Destroyer Tender USS EVERGLADES (AD-24) “the oldest Destroyer Tender in the Atlantic Fleet.” Prompt deployment to the Sixth Fleet and a special assignment in civil relations in Malta, while tending all units of the 6th Fleet. He was awarded a Gold Star in lieu of the Third Navy Commendation Medal. "For meritorious service ... from August 10, 1968 to December 10, 1968..." while deployed to the Mediterranean in command of that tender.

Captain Tidd’s time In Everglades was cut short by urgent orders to Vietnam, to report in May, 1969 for duty as Chief of Staff and Aide to then Vice Admiral Zumwalt who was Commander United States Naval Forces, Vietnam and Chief, Naval Advisory Group, Military Assistant Command, Vietnam. His end of tour award states" For exceptionally meritorious service ... (in that capacity) from May 1969 to May 1970... " he was awarded the Distinguished Service Medal and other decorations of the government of South Vietnam.

Captain Tidd next had orders to take command of the newly modernized guided missile cruiser, USS Columbus (CG-12) in Norfolk. However, in May 1970 while enroute from Vietnam, he was selected for promotion to Rear Admiral and his orders to USS Columbus were changed: to report to the Chief if Naval Operations, for duty, in Washington, DC.

In August 1971 he assumed command of Cruiser Destroyer Flotilla SIX, and while deployed to the Sixth Fleet he was embarked in the USS America (CV-66) as Commander Task Group 60.2 and CTG 502.2, until relieved in March 1972.

On 5 April 1972 Rear Admiral Tidd assumed command of the Navy Recruiting Command with orders to "Prepare for the end of the draft and commence recruiting the All Volunteer Force." This entailed total restructuring of the Navy Recruiting organization, selection and training of recruiters, field support for recruiters, paid national and local advertising, support by known entertainers, sports personalities and stars. The first computer tracking of recruit quality and performance, tied to specific recruiters was instituted; feed back from the Fleet; Fleet support and home town youth returning from the fleet to help local recruiters was instituted. New vehicles, better offices in clean locations, and top performers from officer and CPO fields were brought into the organization. All this had the full support of CNO, VCNO and many flag officers who understood the vital nature of quality recruiting and making manning goals in the All Volunteer era.

On December 13, 1973 Rear Admiral Tidd was awarded a Gold Star in lieu of the second award of the Distinguished Service Medal for his outstanding service as Commander, Navy Recruiting Command. On March 5, 1974 Rear Admiral Tidd was promoted to Vice Admiral, USN. He continued to serve as Commander, Navy Recruiting command until relieved in May 1975.

On 7 June 1975 Vice Admiral Tidd assumed Command of the Naval Surface Force, US Pacific Fleet. During this period, the final consolidation of the Surface Force, brought under one command in the Pacific, all Cruisers, Destroyers, Frigates, Amphibious, Mine Warfare, Service Force Ships, Tenders and Repair Ships, the Special Forces (SEALS), and Amphibious Warfare Schools of the Pacific. Fleet. These Pacific forces and personnel were all consolidated under the Commander Naval Surface Force, U. S. Pacific Fleet.

When the task of consolidating the Naval Surface Forces, Pacific Fleet was completed, Admiral Tidd requested retirement. After over 33 years of service, he was retired from the Navy on 31 July 1976 with the permanent rank of Vice Admiral. On behalf of the President of the United States, he was awarded a Second Gold Star in lieu of the Third Award of the Distinguished Service Medal, "For exceptionally meritorious service ... ." At that time, the Naval Surface Force of the Pacific Fleet consisted of 183 ships and over 55 thousand people.