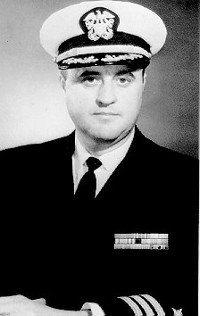 Captain Alberta was born in Norwalk, Connecticut and served 30 years in the Navy, beginning with his enlistment at the start of World War II. After serving in the Pacific, he entered the V-12 Officer Training Program at Dartmouth College. He was commissioned an Ensign upon graduation from Holy Cross College in 1946. Captain Alberta who served in both the Korean and Vietnam Conflicts commanded the Richard B. Anderson DD786, a fleet oiler, and communications stations in Guam and Australia. Major Staff assignments included staff for the Chief of Naval Operations and Naval Communication Command headquarters in Washington, DC. His military honors included the Legion of Merit and two navy Commendation medals with combat V's. Captain Alberta retired from the Navy in 1972 and did consulting work with defense firms. Captain Alberta died on January 17, 2000 of congestive heart failure. He was interred at Arlington National Cemetery with full military honors on January 26, 2000.